water sharing according to bachhawat commission 1976

Total water 2060 TMC
maharashtra 560 TMC
Karnataka 700
Andhra pradesh 800TMC
Surplus water
Maha >> 25
Karnataka >> 34
AP >> 811
regeneration/return flows to the extent of 25, 34 and 11 TMC
over storage when river water more than 2060 reuse when river 2030
scheme b surplus water
surplus water available in the river basin 330 TMC
Maharashtra, Karnataka and Andhra Pradesh in the ratio of 25%, 50% and 25% respectively,
when river water below 2060 TMC
Krishna River Valley Authority
allocation made as per scheme  25,34, 11 TMC
scheme B (surplus water) KRMB  has no constitutional power under  Inter-State River Water Dispute Act, 1956
stipulated that the KWDT order may be reviewed or revised after may 31st 2010. 3. Salt exports tds of water: at least 850 TMC water has to flow to seas through prakasham barrage. to save water quality,
water TDS 500mg/l should not exceed.
360 can be used outside of basin (so basin is safe) 450 TMC has to flow to sea. 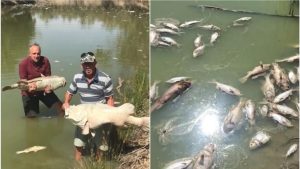 AP argued to give powers to TRMB to allocate,

KRMB: told TS and AP to continue with the sharing of water as per the Bachawat Tribunal (1976), at least till the next one month during which period the two states would have to try and sort out all outstanding issues.

in other words KRMB decided allocation of water which has no power.

KRBM has only regulatory powers and no power to allocate waters or take control of projects.

harish rao said as per bachawat award 45TMC from polavaram to nagarjuna sagar in leigu of adding 80TMC godavari water to krishna basin.