C10K problem handling ten thousand concurrent connections
in Apache every connection handle by 1 worker that holds some memory, ex: 126MB if 500 Connection simultaneously Apache server has to
500*126MB= 63000 MB or 63GB. (it also holds Php as a module to control memory limit.
however, if 500 connections per seconds in reached in Apache you get message like max clients reached. or you may also install a beautiful module that only servers plain html page
in peak time
(Solution caching dynamic content as static (no request database) fastcgi or nginx as revere proxy)
page 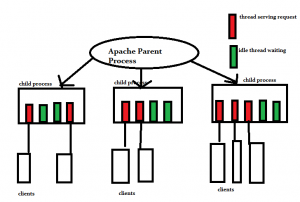 you have to select best for your server or websites need.

Note: we can’t limit apache process memory limit not like php or php-fpm but we can do it by limiting processes or threads) 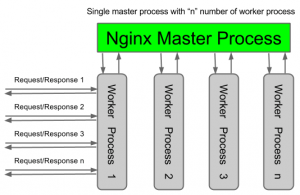 single-threaded and processes use an asynchronous, non-blocking, event-driven connection handling algorithm.
not spawn process based on connection (every process = memory cpu holding)
2 process in nginx based on cores.
connection handling:
connections handled by the worker are placed within the event loop where they exist with other connections. Within the loop, events are processed asynchronously, allowing work to be handled in a non-blocking manner. When the connection closes, it is removed from the loop.

why people use nginx as proxy for apache?

modules: apache modules easy install and configure dynamically and lot of features.
nginx modules can de deployer only once as static. however nginx introduced dynamic module
feature but it has to deploy with again fresh nginx installation(install fresh nginx with new module as dynamic in same /live or another server with same os and version of nginx then copy the module file into production server)

.htaccess look for all servers files when a request process. (you can place own .htaccess to rewrite main server rules like wp .htaccess) but nginx only look specified directory
By not allowing directory overrides, Nginx can serve requests faster by
doing a single directory lookup and file read for each request (assuming that the file is found in the conventional directory structure).

nginx does not allow to overwrite rules every directory. so problems in shared hosting, (memory limit, compression,ssl etc)
cpanel only works with apache.

apache processes to file system while nginx to url

The try_files directive commonly uses the $uri variable, which represents the part of the URL after the domain name

how litespeed faster than nginx and nginx plus

same architecture as nginx. built in litespeed cache. while windows IIS server not free at all. 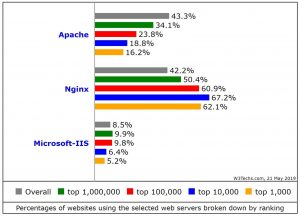