Before buying or upgrading make sure to check SSD with SATA Protocol (500MB/S)or SSD With NVME protocol (2000MB/S. or even 4gbps.

TIP: make sure your laptop or PC Supports NVME Protocol before buying  /upgrading the SSD.

NVME introduced in 2013 to attach to the PCI Express (PCIe) slot on a motherboard instead of using SATA bandwidth. HDD VS SSD VS SSHD speed / throughout

Things to check before buying a SSD

Latency:
storage device to start an IO task called latency
IOPS:
how many Input or Output (IO) operations can be performed by the storage device every second, or IOPS
The greater the number of IOPS, the better the performance.
Speed /Throughput :
The speed at which data is transferred out of or into the storage device is measured in Megabytes per second. Comparing IOPS for SSDs and HDDs

HDD vs SSD vs SSHD Price

Hard drives  with moving parts they will die eventually, they give warning signs like I if your hard drive is making clicking noises.
SSD:contain no moving parts
MTBF (mean time between failures) i
a hard disk drive may have a mean time between failures of 300,000 hours, while an SSD might have 1.5 million hours.
TBW — Terabytes written is the total amount of data that can be written to an SSD before it is likely to fail.  here are the
Samsung 860 EVO 256 gb  SSD: 150 TBW
P/E cycles —  data erased, and then rewritten.  between 500 to 100,000 P/E cycles. 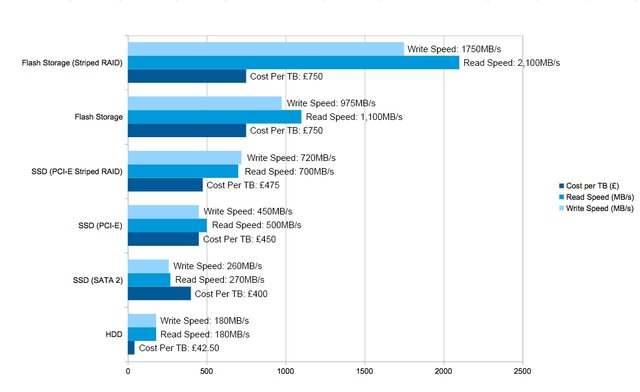 How to use HDD & SSD Together in laptop & desktop

for this buy ssd with hard drive caddy for laptop

after boot up format hdd data.

use ssd for regular application, hdd for storing movies and files. if you are using edit purpose make sure to bring to ssd for faster read & writes.